The Next Journey into TNR

Yes this is part two. It is late, I know. Here is the deal. There are all of TWO of us who actually go out and trap these days. Yes. Two. And me who is writing this isn’t even the main one. I spend most of my time ensuring Coast Cat Project continues to exist by means of social media outreach,CCP HQ, fundraising, making sure we don’t over draft our account (which has happened lately, not kidding), and running all three programs we offer. And the other trapper fosters cats and works full time. These accomplishments are no small feat. We take time off paid jobs to do this work, because we know how important it is. Look this is us, at the trap site. Shelley (left) and I, Alanna (right). 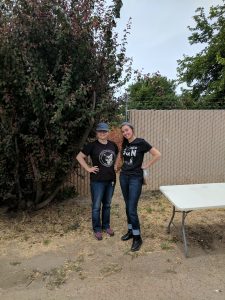 After three years of TNRing, how can it be that we only have two whole trappers, you ask? I’ll tell you, it takes a commitment to the cause. We can work long hours, be really bored, and also make our hands really stinky with bait and carry around super heavy cats in traps. Sure, plenty of volunteers have shown up for a couple hours to watch traps, and we still need more of those people. We also need a few more people who can go from start to finish on these TNR projects, and no one can quite do that like Shelley….

Here are Shelley’s notes on our big day of trapping in Boonville on July 9th, 2019.

“I haven’t had a lot of opportunity since to catch adult cats, so I was looking forward to going after several in an old trapping location in Boonville. Our goal was 20, we had an appointment with the Care-a-Van and we wanted to make the most of it. I was excited to start, so I went to Boonville Monday after I got off work in Fort Bragg at 5 PM. I got to there and was set up and ready to go by 6:30. A black and white Tuxedo tomcat was milling around… I’d seen him before and he would eat the food at the beginning of a trap and then walk away. Well, he was doing it again, but then suddenly he got in the trap and, in my excitement, I pulled the bottle that would release the door, but… on the wrong trap. He ran. I had not been paying attention to the trap I’d actually closed so I was surprised to see the gorgeous Siamese momma inside. What luck! Right around when it got dark and the raccoon showed up; I packed things up since that is always a signal that my night is over. Siamese momma was it for the night. I got home at 11:30 PM. 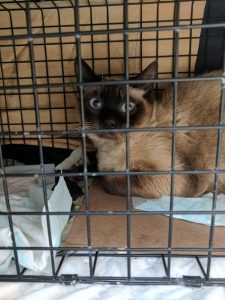 I was up and back in downtown Boonville at 8:30 AM the next morning with the giant white van we sometimes borrow from CCP’s president Carla. I love driving it; it has a big Mustang engine, handles so well, and is enormous. Also, it makes me feel like I can trap all the cats. I’d taken the day off work to trap all day. I got setup with nine baited traps spread around the property. It was already hot by 9:30 AM. To make the most of my time I cut up the pillow cases that the Humane Society thrift store (The Ark) had donated to us. We use them as trap and carrier covers to keep the kitties calm while contained. I walked around the property and had gotten a large black kitty. It was trying very hard to get through the door that closes when the trap goes off, so I scrambled around to find a stick to “lock” the trap and to hold down the door. That ended up being the only one I got at that site that afternoon. Alanna and Jonathan came at 1 and brought me a sandwich from Lemon’s in Philo (They make great sandwiches!). I left them at that site and went to the site . 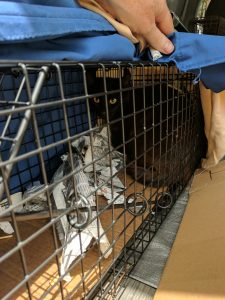 These kitties were not trap savvy at all. The house is abandoned and there is a back porch with a bunch of junk. I trapped one after another back there. I trapped a couple that were already fixed and had to let them go, and had one trap that kept going off on it’s own. I got nine adults including a big white cat that we later discovered was fixed already, but he had cancer on both ears so they removed that instead of neutering him. Then, at the end, I had help from a neighbor and got one last girl. I dropped the cats off with a volunteer, Jill, who would keep them overnight and then headed over to relieve Alanna and Jonathan the downtown site. I ended up there for another four hours and didn’t get anything except being teased by the Tuxedo and having the raccoon come shut me down again. Ultimately I spent 26 hours between traveling, trapping, cleaning up and returning equipment, and I drove 170 miles to get 11 cats. It was worth every minute and I’d do it again right now if I could.”
Yep, she’s pretty amazing isn’t she?! Honestly, its like 4 days later and she’s back there now trying to trap more kittens. Holy cow.
My side of the story is a little different. I spent several hours the day before getting the van prepped, gassed up, and filled with supplies. We took a trip to Mendocino to drop the van off at Shelley’s so she would be ready to go right away. The next day, we headed down to Boonville around noon. We spent 7 hours with traps set at our main trapping location and we only caught ONE cat. And, it was already eartipped, meaning it had previously been spayed/neutered, vaccinated, and returned, likely by us. We revamped the traps with new locations, new bait, and alternated traps from uncovered to covered, all day. No bites. No nothing. Meanwhile, Shelley trapped like a machine at the other location. Dang! Regardless, it was good. Jonathon and I being there meant Shelley could go to the other site, plus we connected with a new volunteer Jennifer, as well as found out about two more sites with breeding cats & kittens. Before we headed back to the coast, we stopped off at the trap fosters house where Shelley had dropped the cats for their overnight stay. We slid in water bowls and small portions of food for each cat and chatted with Jill, the trap foster, about the procedure for the next steps in the process. Finally, we left for home around 9pm, and arrived at 10:20. That’s about 10 hours for us, and a whopping 15 hours for Shelley. 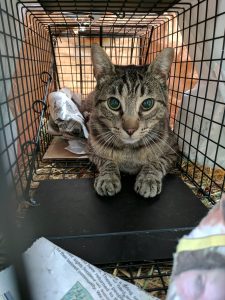 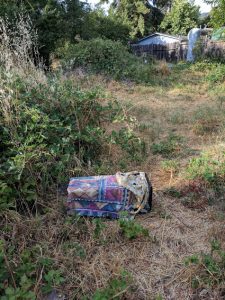 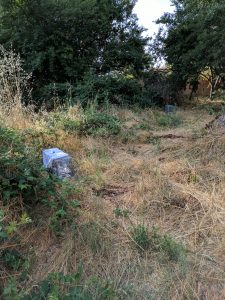 These are particularly long TNR days. They are not our usual by any means, but they honestly are our most fun and most enjoyable. Most of the time, we’re working on one, two, or three cats at a site. It’s exciting when we can catch 10 or more in one day. Stay tuned for the results of this particular TNR effort, how the spay & neuter day went, and some info from Jill who brought all the cats the vet & let them recover at her home, and then back to their home sites!
Posted in Latest News