A Journey into TNR (Trap/Neuter/Return) 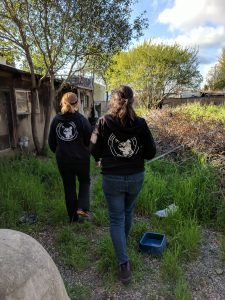 This week we will be working on one of our largest and most challenging cat colonies, mainly due to the distance from us and logistics of getting cats fixed there. The Anderson Valley, which only receives mobile veterinary services such as the Care-a-Van, is an underserved area for community cats. But, lets start from the beginning… 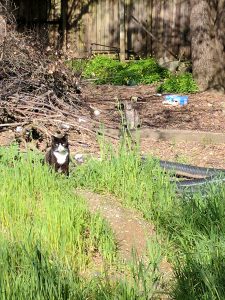 It always starts with a desperate call for help. It would have been easy to refer them to someone else…. to say we do not cover that area, but who would help? At the time, there was no one else that we knew who did this work. So when this call came in, from someone who lives on the coast and owns a vacant property inland, we had to at least check it out. Someone told her there are lots of cats living on the property and even kittens. Alanna was going out of town so I asked her to swing by and check it out on her way back; maybe we could figure out someone to help. She called me from the site in tears. She was saw the cats, but also instantly came across a dead kitten. From that point on, we were on it. The number we were originally quoted was 100 or more cats/kittens. The first year alone we pulled off approximately 45 live kittens, found 9 dead and started the process of getting the adults fixed and some even relocated. This was the summer of 2017 and we have been chipping away at it ever since then. Slowly. Patiently

We started out by talking to neighbors, who at first were hostile (the cats were everywhere and quite the nuisance) about them, but we discovered that this colony started with a single kitten. A young woman had received a free female kitten that was not spayed. When her landlord found out, he evicted her and when she moved she left the cat behind. There were, unfortunately, unfixed kitties in the area already, especially males, the colony explosion began. At the time, there was someone feeding and trying to make a difference. He had only a couple traps and would have to take them to Ukiah, which was hard due to his job. Even though he was trying, cats breed exponentially fast, so it got out of control before anyone could get a grip on it. 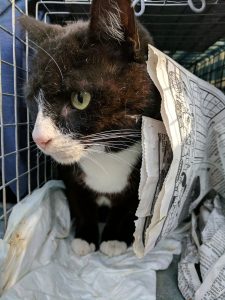 I (Valerie), decided that since we are attempting a massive trapping at this location this week, we should share the experience in detail so our followers understand the amount of time and energy goes into this process. From start to finish. How many collaborations are needed to get it all done and why we are constantly pushing spay and neuter. Since this colony is not on the coast, the resources and connections we have won’t apply there; so we contacted the Anderson Valley Animal Rescue. They have since been funding our vet care for Anderson Valley animals and cover costs of many other animals at the Care-a-van. They did not know the colony was out of control, and do not really have the volunteers to handle this, but they do have money for vet care. This is a huge help. To be able to help these poor cats without having to worry about the financial part makes it just a little easier spending so much of our personal time, sitting in the hot weather watching traps. (We prefer winter trapping but have to work around spay neuter resources) 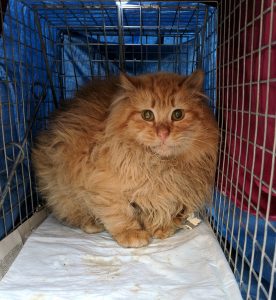 So this week you can follow our journey, and even join it if you would like. The Mendocino County Care-A-Van, another amazing partner in this process, is coming this week to spay and neuter up to 20 cats for us from this colony and another in this area. We have also had help from the Mendocino Coast Humane Society at points and AVAR has paid some of those bills as well. Tonight it begins with the first round of trapping. We know of at least 8 adults left and two kittens on this site with many more at another near by site, and we’ve pulled 12 kittens from Anderson Valley already. 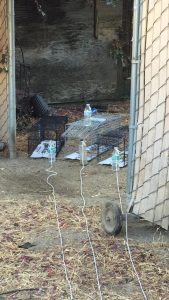 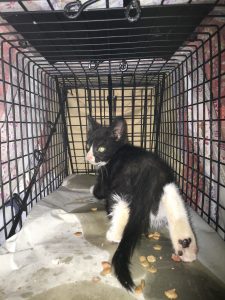 Yesterday Alanna and Jon began by sanitizing and counting traps and making new trap covers. Then today they collected all the supplies, loaded up the van, filled it with gas, then parked it at Shelley’s house so she could head out straight after work (she’s there now!). Tomorrow all three will spend the day trapping, then tomorrow night Shelley is training a new recruit, Jennifer to help us out. Jill, who lives nearby will keep the cats in traps safe over night and transport to the clinic. So proud of this team that will make life better for this colony and the neighborhood. It’s a long process, and this has been a long project. Thank you to everyone who has supported us! 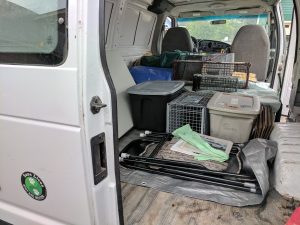 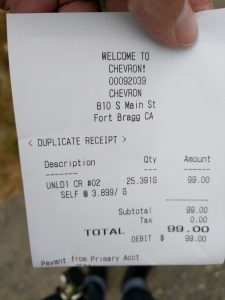