Whenever we receive a desperate call, our rescue instincts go into high gear. No matter where that cats in need are, we consider all things and do our best to make sure we can safely take in more cats. This call stuck out to us…

A rescue was seized

It’s painful to see: someone was trying to save cats from the high kill shelters that LA is known for, and got themselves in too deep. They continue to take in kitties, well past “capacity,” and cats start to become neglected, cats get sick, and some don’t make it. Animal Control was called in. It’s when rescue turns hoarder.

Miss Maggie, Prior to Rescue Pull from Shelter

An estimated 100 cats were found, many confined to cages. 18 were found dead or needed euthanasia. LA Journalist Stephanie Stephens took it upon herself to follow this case and ensure all the surviving rescued cats found homes. They started out at the Riverside Animal Shelter, and then Moreno Valley Animal Shelter, for medical treatment and adoption. Over the months, many cats were adopted, but some lived out their stays and Stephanie saw to it they were transferred to other shelters for second, and third chances. By the time she called us, only 9 cats and 5 kittens were left, and they were only 2 days from their time being up, meaning euthanasia. After everything these cats had been through, and all the time they had spent confined in cages, Stephanie could not bear to see these final cats die, and neither could we. 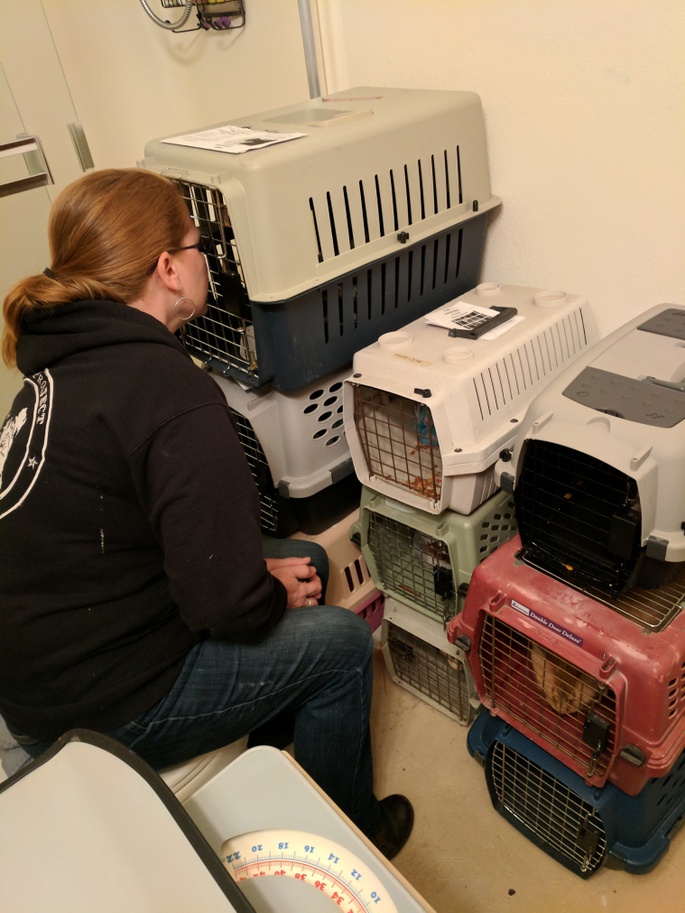 Thankfully, we had room, particularly in our Barn Cat Program. It was stated that many of these cats were feral, so we said yes. A two-step transport was set into place, thank you Megan and Mary, and the cat’s arrived in Fort Bragg, CA around Midnight on August 24th. The cats were evaluated and slated for either foster or barn homes. Thankfully, many came in spayed/vaccinated from the Shelter. Two cats went to a fantastic barn home the next morning, and the rest were split up into foster homes. The following week, two more cats went to an amazing barn home. The remaining five adults and kittens, though, turned out to be friendly or socializable, so we decided to pursue home adoptions instead of barn homes. Of this group, all were healthy except one… Miss Maggie is a very friendly, senior tabico cat. She came in unfixed, as she died on the shelter operating table *twice* while the Veterinarian was trying to spay her. We got her in with our vet, Detrick’s Veterinary, to check her out right away. As it turned out, she had more problems. Miss Maggie had Resorptive Ulcers that were eating away her teeth, resulting in extreme pain and difficulty eating. Of course, there were grave concerns about putting her under anesthesia again, so a careful evaluation followed as well as communication with the original vet on the medications used. We’re happy to say that her teeth were successfully removed this month and she survived the surgery! The Vet and staff said it was some of the worst they’d ever seen. We’re so thankful to Dr. Thomas at Detrick’s Veterinary for her attentive and concerned care with Miss Maggie. Miss Maggie is recovering, feeling immensely better, and soon will be spayed and put up for adoption!

How You Can Help

Miss Maggie’s surgery cost $1,780. This is a big unexpected expense that came from this rescue, and we could use your help. All our funds are dedicated to continuing our spay and neuter mission and to continue to save kittens off the streets. Not only this, there are some extra expenses related to this rescue that we’re hoping to raise money for, such as the spays and neuters at the Moreno Valley Animal Shelter, volunteer reimbursements, and the extra supplies these cats have needed such as food, litter, beds, and toys.  Anything helps! We thank you so kindly in advance for being apart of this rescue mission.

Coast Cat Project is a 501c3 Cat Welfare Organization on the Mendocino Coast. Our mission is to Improve the lives of Community Cats through our three major programs: Trap-Neuter-Return, Kitten Rescue, Rehabilitation, and Socialization, and Barn Cat Placement.